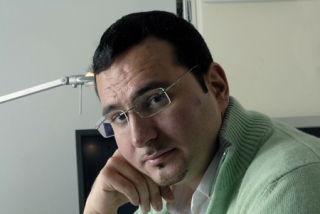 Massimo Mecella (born in Rome, Italy in 1973) holds a PhD in Computing Science and Engineering from SAPIENZA (earned on 21 January 2002). Currently he is associate professor in the School of Information Engineering, Computer Science and Statistics of SAPIENZA, in the Department of Computer, Control and Management Sciences & Engineering ANTONIO RUBERTI (DIAG, formerly DIS - Department of Computer and Systems Sciences). He has recently achieved (April 2017) the Italian National Qualification (ASN) to Full Professor. From March 2005 to August 2006 he has been a Postdoc on Service Oriented Computing: Synthesis and Orchestration of Composite Services at DIS. In the winter semester 2005, he has been a temporary research assistant at CERIAS (Center for Education and Research in Information Assurance and Security) and Department of Computer Science, Purdue University, USA, hosted by Elisa Bertino. From November 2002 to October 2004 he has been a research fellow in SAPIENZA (in the Latina campus). During the PhD period, in 1999 he has been internship student at Telcordia Applied Research, Telcordia Technologies (formerly Bellcore), Morristown, New Jersey, USA, hosted by Amjad Umar, Paolo Missier and Francesco Caruso.

He has given various tutorials on automatic composition of services, at INFWEST School 2007 (University of Jyvaskyla, Tampere, Finland), ICWS 2006, WWW 2005, ESWC 2005, ICSOC 2004. He has given the invited talk at ProGility 2008 @ WETICE 2008 on adaptivity in process management systems. He has given seminars on Service Oriented Computing and emergency management through process management systems on mobile devices at Dipartimento di Elettronica ed Informazione, Politecnico di Milano (2006 and 2007, hosted by Barbara Pernici) and at Information Systems Institute of Wien University of Technology (2006, hosted by Schahram Dustdar). In 2012 he has been invited to give a seminar on Advanced User Interfaces, Services and Processes: Making Sense of All of Them Together at XEROX Europe Research Center (Grenoble, France), hosted by Gregorio Convertino and Antonietta Grasso. In 2008 he has given a seminar on Resources as Synchronizers, Rules as Resources for Adaptive Workflow in MANETs at Technische Universitat Berlin (Berlin, Germany) hosted by Hartmut Ehrig and Kathrin Hoffmann.

He has been the technical manager of the EU research projects WORKPAD (FP6, ended in 2009) and SM4All (FP7, ended in 2011), and partecipates(ed) with important roles to the EU research projects GreenerBuildings, SmartVortex, SemanticGOV, EU-PUBLI.com, GENESIS, to the national research projects eG4M, MAIS, VISPO, DaQuinCIS. He has been working with important roles in the application/industrial projects UWWTD (for the Italian ISPRA), DesigNet (for IGuzzini, Teuco, Mercantini, etc. on the Italia 2015 initiative), COSM Factory (for Herzum Software), Reengineering of the Portal of the Italian Ministry of Health, U.P.R. -  Uffici Provinciali Reingegnerizzati (for Provincia di Latina), VAS (for Selex SeMa), METIS (for TRS), Web-component Architecture (for AMA Roma).

He has been PC Co-Chair of 2013 IEEE Conference on Service Oriented Computing and Applications (SOCA 2013). He collaborated in managing WISE 2003, CoopIS 2001 and DQCIS 2003 Workshop (proceedings chair), has been workshop chair of BPM 2008, has been Co-Chair of 1st International Workshop on Knowledge-intensive Business Processes (KiBP 2012), and he is regularly PC member of the most important conferences of his research areas, including ICSOC, CoopIS, ODBASE, BPM, WISE, WETICE, CEC/EEE (now IEEE Conference on Electronic Commerce Technology), ISCRAM. In 2008, 2009, 2010, 2011, 2012, 2013 he has been co-chair of the track on geo-science and technology (GIS&T) of the International Conference on Information Systems for Crisis Response and Management (ISCRAM). In 2007 he has been co-chair of the session on support for flexible service and data management platforms for crisis response at the same ISCRAM.

Massimo Mecella is one of the founding members of Over Technologies, a spin-off company of SAPIENZA, which aims also at delivering on the market the results of the projects SM4All and GreenerBuildings.

Massimo Mecella has served as reviewer of project proposals for NOW, Netherlands and Regione Lombardia. He has been EU Expert/Reviewer in 2012 e 2013.

TEACHING and OTHER ACTIVITIES

Massimo Mecella has been teaching since 2002 in the School of Engineering in SAPIENZA.
He has given courses at the master level on Information Systems, Advanced Software Design, Service Oriented Architectures, Distributed Technologies and Middleware, and at the bachelor level on Object Oriented Analysis and Design, Software Design, Computer Architectures (in the Latina campus), Operating Systems. Currently he teaches in the School of Information Engineering, Computer Science and Statistics of SAPIENZA.

The previous topics are challenged in the application domains of eGovernment and eBusiness, domotics, smart houses and smart spaces, healthcare, disaster/crisis response & management.