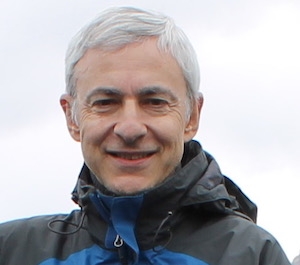 Giuseppe Oriolo received the Ph.D. in Systems Engineering in 1992 from Sapienza University of Rome. In 1994 he joined the Department of Computer, Control and Management Engineering (DIAG) of the same university, where he is currently a Full Professor of Automatic Control and Robotics. He is the coordinator of the DIAG Robotics Lab. He has also held teaching positions at various italian universities, including the University of Siena, of Cassino and of Roma Tre, and has been Visiting Scholar at the University of California at Santa Barbara. His research interests are in nonlinear control and robotics, and in particular: planning and control for nonholonomic mobile robots; visual motion control; multi-robot systems; sensor-based map building, localization and navigation for mobile robots; remote control and laboratories; motion planning in the presence of obstacles; learning control in robotic systems; planning and control for kinematically redundant robots; assistive robotics. Giuseppe Oriolo has been Associate Editor of the IEEE Transactions on Robotics and Automation from 2001 to 2004 and of the IEEE Transactions on Robotics from 2004 to 2005. From 2009 to 2014, he has been Editor of the IEEE Transactions on Robotics. He is a Fellow of the IEEE. He regularly serves on the Program Committee of several international conferences, including the European Control Conference, the IEEE International Conference on Robotics and Automation (ICRA), the World Automation Congress, the IEEE/RSJ International Conference on Intelligent Robots and Systems (IROS), the International Conference on Advanced Robotics (ICAR), Robotics: Science and Systems (RSS), and many others. From 2007 to 2011 he has served on the Conference Editorial Board of the IEEE Robotics and Automation Society. In 2008 and 2009 he has been Area Chair for the "Robotics: Science and Systems" conference series.